“It just has to come to a boil so it thickens up a little,” White said.

While the soup heats, White puts together grilled cheese sandwiches to serve alongside for lunch for fellow firefighters Casey Otten, Tylor Lampkins and Curt Felker.

Crew members share the cooking duties, with one handling breakfast, another lunch and a third supper.

“We’ll try to talk to each other, get some sort of plan before we come in for our shifts, and we typically shop on our own and bring stuff in,” White said. “We like to try to cook all of our meals, but it doesn’t always work out that way.”

Popular choices for lunch and supper are soups and chilis, burgers, pastas and White’s Cajun Salmon.

“It’s a nice easy fish recipe you don’t have to babysit, and Cajun seasoning’s a hit around here. We put it on everything,” White said. “Usually the quicker and easier it is, the easier it is for us to manage.”

Some 25% of the department’s meals — and often the ones when the chef is trying something new — don’t get eaten either when planned, or in the same condition as planned, because of emergency calls.

“We’ll still eat them,” said Otten, a lieutenant and a 15-year veteran with the department.

White worked for eight years with the Hannibal, Mo., Fire Department, where he learned to cook, and joined Tri-Township six months ago.

“If I’ve got a recipe, I can handle about anything,” White said, but he doesn’t strictly follow the recipe. “Sometimes recipes are just a blank canvas to get you started and going in the right direction, something for you to alter as you see fit.”

That creativity along with a willingness to try something new are keys in the kitchen.

New recipes White finds online or hears about often find their way onto a lunch or supper menu. “It’s a captive audience here, good to test things on,” he said, and he always knows if the recipe is one to repeat. “We’re all pretty honest. You’ll know their opinion on it.”

“Usually we try to say whoever cooks does not do dishes,” White said. “It doesn’t always end up that way because of duties and other events. Sometimes you cook and do the dishes.”

In a large stock pot, combine all ingredients, and bring to a simmer. Add cream cheese and half and half. Bring to a boil until thickened.

Coat a baking sheet with cooking spray. Place salmon, skin side up, on baking sheet, then into a preheated oven on the low broiler setting. Once the skin starts to bubble/lift away from the meat, pull the baking sheet out of the oven. Remove skin, butter and season liberally; flip the salmon, and repeat.

Place the salmon back in the oven, and cook until desired doneness (145 degrees at the thickest point). 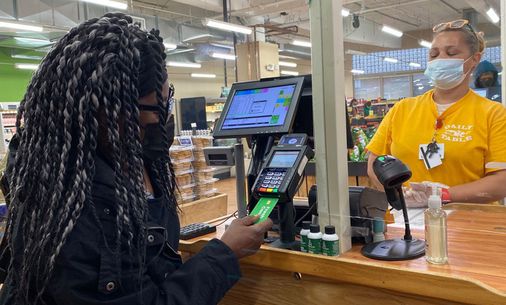