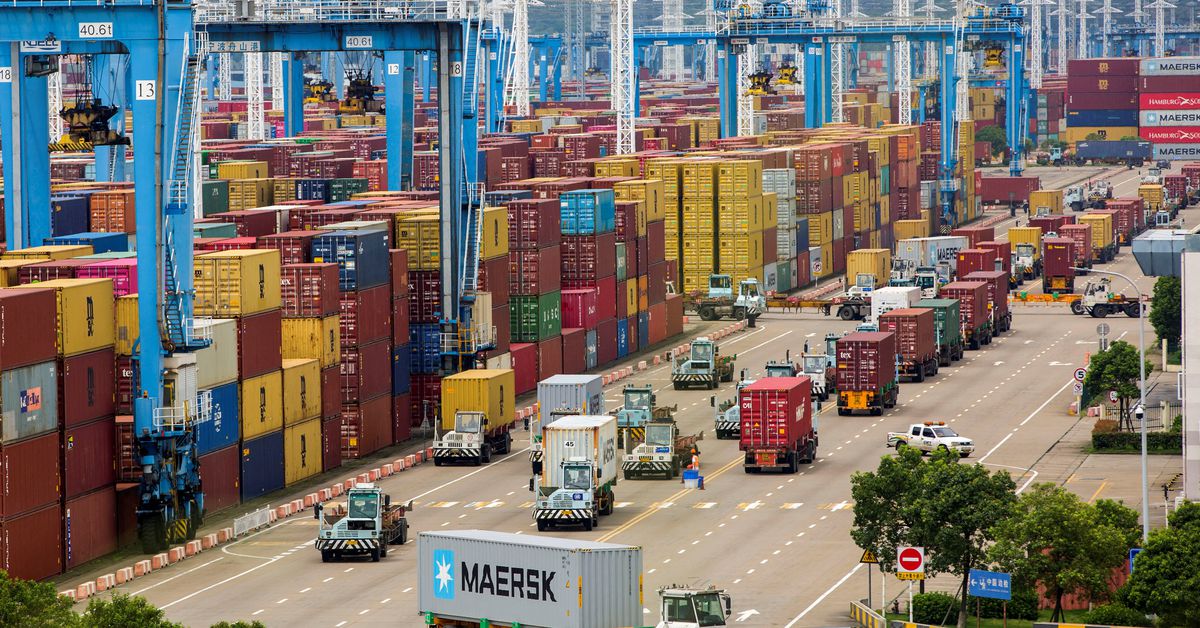 Lines of trucks are seen at a container terminal of Ningbo Zhoushan port in Zhejiang province, China, August 15, 2021. cnsphoto via REUTERS

BEIJING, Dec 13 (Reuters) – Makers of Irish whiskey, Belgian chocolate and European coffee brands are scrambling to comply with new Chinese food and beverage regulations, with many fearful their goods will be unable to enter the giant market as a Jan. 1 deadline looms.

China’s customs authority published new food safety rules in April stipulating all food manufacturing, processing and storage facilities abroad need to be registered by year-end for their goods to access the Chinese market.

But detailed procedures explaining how to get the required registration codes were only issued in October, while a website for companies allowed to self-register went online last month.

“We’re heading for major disruptions after Jan. 1,” said a Beijing-based diplomat from a European country who is assisting food producers with the new measures.

China’s food imports have surged in recent years amid growing demand from a huge middle class. They were worth $89 billion in 2019, according to a report by the United States Department of Agriculture, making China the world’s sixth largest food importer.

China has tried to implement new rules covering food imports for years, triggering opposition from exporters. The General Administration of Customs of China (GACC), overseeing the latest iteration of the rules, has provided little explanation for why all foods, even those considered low-risk such as wine, flour and olive oil, are covered by the requirements.

Experts say it is an effort to better oversee the large volumes of food arriving at Chinese ports, and place responsibility for food safety with manufacturers rather than the government.

GACC said in a statement sent to Reuters that it had sought public comment on the rules prior to April.

It has “fully considered and actively accepted reasonable suggestions” and strictly followed WTO agreements on implementing food safety measures, it said, adding that it had also responded to company questions.

Last week, GACC agreed that implementation should only apply to goods produced on or after Jan. 1, effectively granting a delay for products already shipped, said the European diplomat, though it has not yet published an official notification.

Still, several diplomats and exporters said they saw the rules as a trade barrier for overseas products.

“We have never had anything this draconian out of China,” said Andy Anderson, executive director of the Western United States Agricultural Trade Association (WUSATA), a trade group that promotes U.S. food exports.

He described the rules as a “non-tariff trade barrier”.

Food, especially chilled and frozen food, has already faced severe delays clearing Customs in China in the last year due to coronavirus testing and disinfection measures.

Foods including unroasted coffee beans, cooking oil, milled grains and nuts are among 14 new categories deemed high risk that were required to be registered by the end of October by food authorities of the exporting countries.

Facilities making low-risk foods can register themselves on a website that launched in November but has not always worked.

“The Chinese system is working now but the English one is on a trial version,” said Li Xiang, business development manager at Chemical Inspection and Regulation Services Ltd (CIRS) Europe, which is helping companies with the registration process.

The rules only apply to facilities making finished products to be exported to China, but it provides little flexibility to change sourcing or labels.

Some U.S. spirits companies have registered but are still unclear on labelling requirements, said Robert Maron, VP International Trade at the Distilled Spirits Council of the United States.

“There is not a lot of time to understand what the requirements are and I think that is the main concern from our membership,” he said.

No Irish whiskey makers assisted by CIRS Ireland have been able to register so far, said Li.

It is not clear what will happen if goods arrive without the required registration codes stuck onto packaging.

“For the moment, the information we got from (Chinese) authorities is that there won’t be a grace period,” he added.

Reporting by Dominique Patton in Beijing and Siddharth Cavale in Bengaluru; Additional reporting by Julie Ingwersen in Chicago and Francesca Landini in Milan; Editing by Lincoln Feast