A heartwarming way to counter the dark chill of winter is to make a big batch of homemade soup. Besides bringing warmth and cheer to the table, it also provides tasty, comforting nutrition. By making your own soup, you can limit sodium, avoid additives and fillers, and plump the pot with healthy ingredients, like bright, fresh veggies.

Since January is National Soup Month, why not celebrate it with some new recipes from four North Shore chefs? Their soups are simple to make and so satisfying, you’ll want to try them all.

At Casa Corona in Marblehead and Hacienda Corona in Lynn, the signature black bean soup is the one chef-owner Felix Bracamontes grew up eating in Mexico. “All the recipes [in my restaurants] are from my mom and grandma,” says Bracamontes, who began his restaurant career washing dishes in Redding, California, at age sixteen. “I did that for two years, and then one day a friend who was a cook [in a nearby Mexican restaurant] said, ‘Hey, come learn to cook with me because you won’t have much of a life washing dishes.’” Bracamontes ultimately became head chef at that restaurant and then worked in Colorado and around New England before opening Casa Corona in 2012, having seen the space was for rent on a drive to Marblehead.

“The size looked good, and it had a big kitchen. I did the deal in less than three days,” says the chef, whose brother is also in the restaurant industry. Bracamontes serves his black bean soup with sour cream, queso fresco, and pico de gallo. “When I taste it, the flavors remind me of my grandma and mother.”

Manny Lapa, chef and general manager of Azorean Restaurant & Bar in Gloucester, serves the same Portuguese kale and chouriço (also known as chorizo) soup that he savored growing up in Lisbon. “It is just full of goodness—you have beans, you have kale—it’s a whole meal,” says the chef, who adds elbow macaroni to the soup because that’s how his mother made it. “It was a way to stretch out the soup and give it some substance. To me, soup and a loaf of bread is a meal. Put a glass of wine with it, and I’m good.” In addition to using quality broth, Lapa peels the potatoes because they tend to lose their skin when cooking. To prevent the chouriço from breaking up, Lapa keeps it whole until adding slices to each bowl. “This soup is actually better when it’s two or three days old,” says Lapa, who eats soup for supper most nights after service because it’s easy to digest.

2. Stir in wine and cook mixture for 1 minute. Add stock to pot, along with kale, potatoes, beans, macaroni, and tomato paste. Bring mixture just to a boil, reduce heat to medium, and simmer for 20 minutes, or until potatoes and pasta are cooked through.

3. To serve soup, remove chouriço from pot and cut into slices. Add several slices to each bowl and top with soup.

Aaron Chambers, chef and co-owner of Salem’s French-Mediterranean restaurant Settler, always has soup on his menu, like the Moroccan spiced pumpkin velouté. “Up until I was nineteen years old, I was vegetarian, so in my house, we ate a lot of soup, and it was always vegetable,” says the British-born chef. “Ninety-nine percent of Settler’s soups are vegetarian. We have so many people coming into the restaurant with different allergies and restrictions that I like to have options for them, like a delicious soup, which doesn’t need dairy to be velvety and creamy.” To give his soups snap, Chambers often adds far-flung seasonings that he encountered working in various kitchens, including a Michelin two-star restaurant in England, a hotel restaurant in Dubai, an Indian-French fusion spot in Washington, D.C., Manhattan’s Café Boulud, and the former Bar Boulud in the Mandarin Oriental Boston.

“I love spice, and when I was in Dubai, I used to go to the spice souk, where I got to taste things I hadn’t seen before,” says Chambers. “So, I always like to mix a little North African into the Mediterranean food I do and the pumpkin and warm spices in this recipe work really well together.”

Harissa is a spicy pepper paste native to Algeria and Tunisia. Ras el hanout is an Arabic seasoning composed of warm spices, like cinnamon, allspice, and ginger.

2. Drizzle squash all over with 4 tablespoons of oil and season with salt and pepper. Place squash, skin side up, on a foil-lined baking sheet. Roast squash 35 to 45 minutes or until tender when pierced with a sharp knife. When squash is cool enough to handle, scoop out meat and discard skin.

3. Place a Dutch oven or heavy-bottom soup pot over medium-low heat and add butter. When butter has melted, add onion, celery, and carrot. Sauté vegetables until tender, about 6 minutes. Stir in garlic, bay leaves, thyme, and harissa; cook for 5 minutes.

5. Working in batches, purée soup in a blender until completely smooth. Transfer velouté back to soup pot, adding more broth if soup seems too thick. Bring to a simmer and season with more salt and pepper to taste.

7. Mix pumpkin seeds with remaining 1 tablespoon of olive oil and season with a pinch of salt and pepper. Scatter seasoned seeds evenly on a foil-lined baking sheet; broil until golden brown.

8. Blend yogurt with orange zest and season with a pinch of salt and pepper.

9. To serve, ladle soup into bowls, top with a dollop of seasoned yogurt, some crunchy pumpkin seeds, and a pinch of ras el hanout.

When Chef Glenn Varga and his wife opened Allie’s Beach Street Café in Manchester-by-the-Sea four years ago, the Poisson Rouge soup was one of the first dishes they put on the menu. “We do rustic French dishes, like Coq au Vin and Beef Bourguignon, as well as some French Vietnamese and Creole cooking,” says the chef, who learned to cook at various restaurants in New Jersey and New England. Varga based his Poisson Rouge soup on a Haitian entrée of red snapper in a sweet and spicy tomato-based sauce seasoned with annatto, which he says is key to the soup’s color and flavor.

“We added some clam stock to the [Haitian snapper recipe] and made it with big chunks of fresh local haddock. We put a couple of fried plantains in it, and you get this nice sweet and spicy combination.” Varga makes all his stocks from scratch and considers soup one of the most important dishes a restaurant can offer. “It just speaks of something that is home-cooked and soulful, and comes from the heart of the house.”

To save time, Varga says you can substitute packaged plantain chips for the sautéed fresh plantains. Most supermarkets carry annatto powder (in the Goya aisle) and jerk seasoning.

1. Heat oil in a Dutch oven or heavy-bottom soup pot over medium heat.

2. Add next nine ingredients. Sauté vegetables and spices for 3 minutes.

3. Add fish stock and tomatoes; bring mixture to a boil. Reduce heat to medium-low and simmer soup for 25 minutes.

4. Season with salt and pepper to taste. Add fish and cook until it easily flakes, about 10 to 12 minutes. Keep soup warm.

To make the garnishes

1. Heat oil in a large skillet over medium-high heat.

2. Add plantain slices and sizzle until both sides are golden, about 6 minutes. Drain plantains on a paper towel–lined plate.

3. To serve, place an even portion of plantains in each soup bowl. Top with soup, and garnish each serving with some avocado and cilantro. Let each person squeeze a wedge of lime over soup. 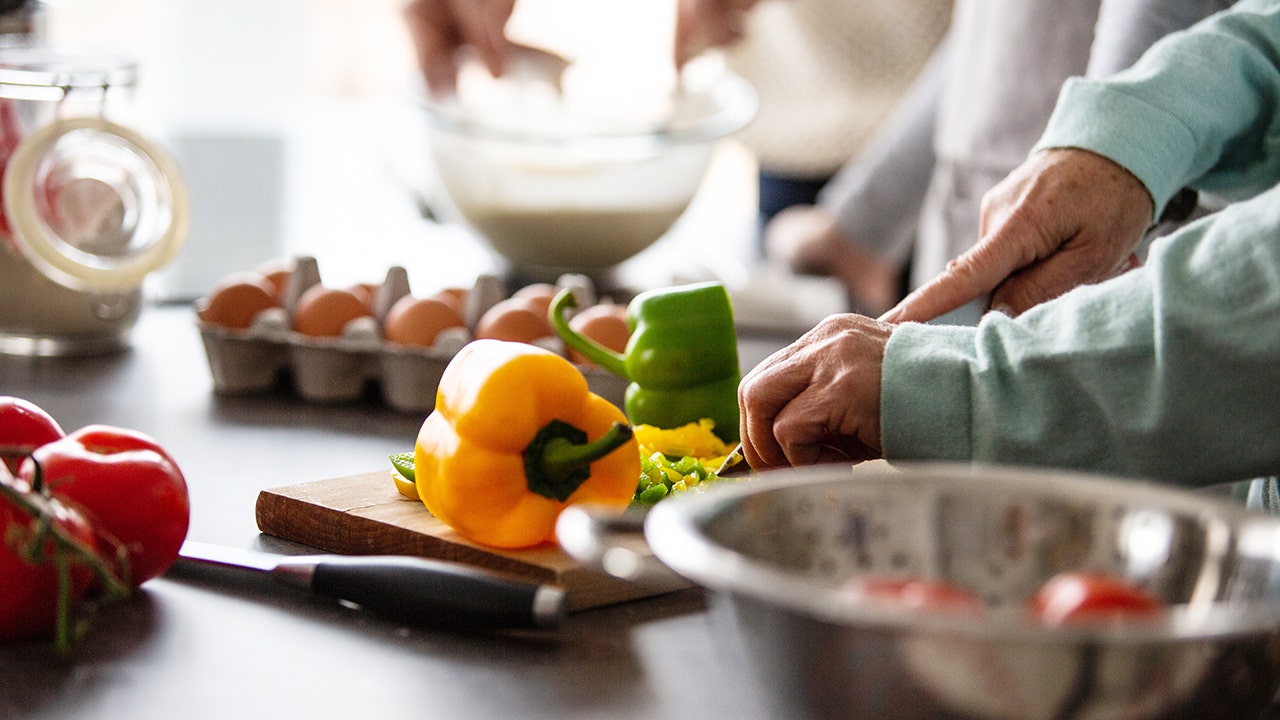