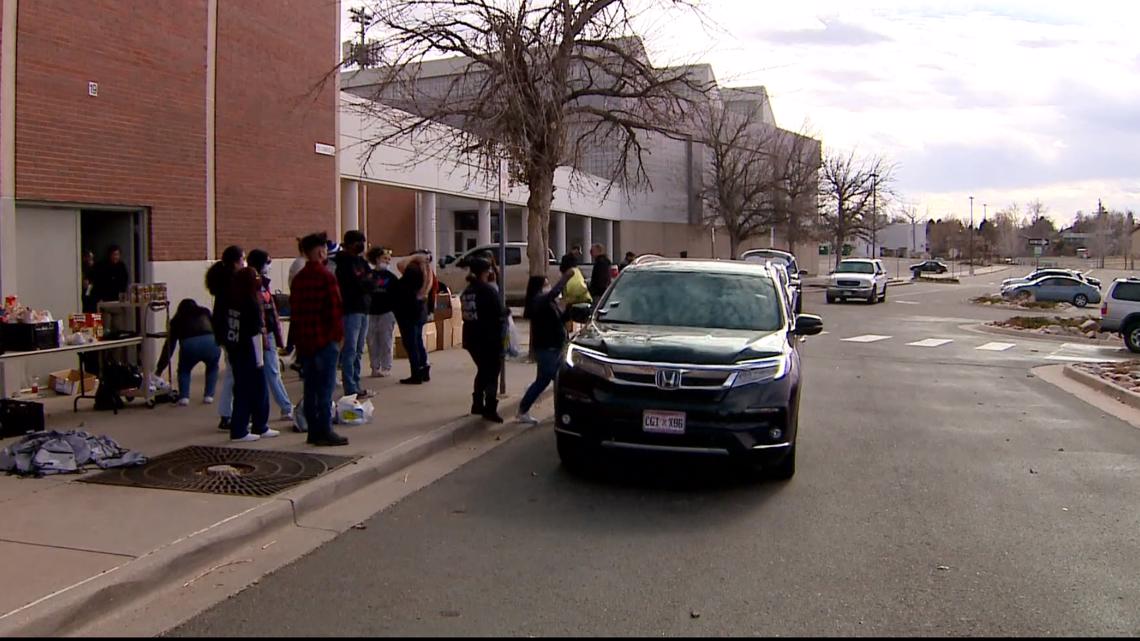 Volunteers and organizers said they’re still processing what happened on Friday, but still wanted to show up to help the community.

AURORA, Colo. — Not even 24 hours after the shooting at Hinkley High School, community leaders, students and volunteers came back to the school for a Thanksgiving food drive to help benefit a community that’s been having a tough week.

The first shooting was at Nome Park, across the street from Aurora Central High School on Monday. Six students were injured.

“That’s the kind of thing you think of as a once in a lifetime thing,” said Reid Hettich, the pastor at Mosaic Church of Aurora.

But sadly, it happened again Friday outside of Hinkley High School where police say three students were shot in the parking lot.

The shooting happened at the same time the community was gathering nearby for a peace march for Monday’s shooting.

“So, we canceled the march immediately,” Hettich said.

Less than 24 hours later, that same lot where students were injured is now serving the community.

“They identified 140 families from Hinkley and East Middle School just down the street here, who could really use a hand during this Thanksgiving period,” Hettich said.

They’re providing everything you need to have a happy Thanksgiving for those on two legs and four.

“Most of these bags right here have about six to seven cans of dog food,” said volunteer Lupe Flores.

Everyone still showed up for the event, even if they’re still shaken.

“It sort of just illustrates the strength of community,” Hettich said. “You come together at moments like that. And it’s something about the pain is just a little bit lessened because you are together with friends and neighbors.”

Coming together to address violence is something Aurora’s Youth Violence Prevention team has seen a lot of in the past few days.

Those in attendance said this was a much-needed distraction they hope can help ease the pain.

Aurora’s Youth Violence Prevention Team said they are dedicated to understanding what kids need to combat gun violence. They are working to add more resources and continue to build relationships with community partners.

Aurora Police said a 16-year-old was arrested for the Hinkley High School shooting. His name is not being released since he’s a juvenile but he is facing attempted murder charges. Police said he was not one of those injured in the shooting, but it’s still unclear if he’s a student.

Police said they have identified two suspect vehicles in connection with Monday’s shooting at Nome Park and have found one of those vehicles. No arrests have been made in connections with that shooting.