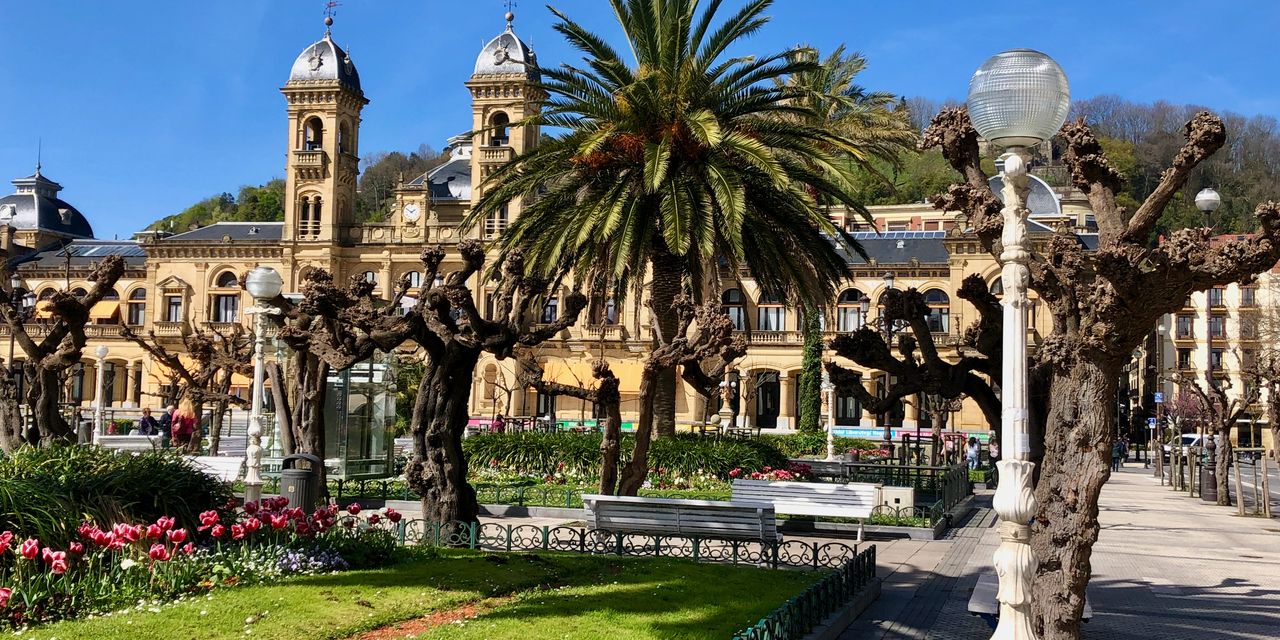 Spain is currently open for tourism, but with restrictions. Check the most up-to-date guidelines before planning your trip. Contact all businesses for days and times of operation.

It’s easy to understand why
Anthony Bourdain
said San Sebastian was one of his favorite places in the world to eat. The gastronomic capital of Basque Country—an autonomous community in northern Spain—the resort town is where food and drink are without a doubt a way of life.

Also known as Donostia in Euskara, the ancient Basque language, San Sebastian is an extraordinary destination garnering more Michelin stars per square mile than gastronomical hubs like Paris, London, and New York. Its culinary prowess is as evident in the bold flavors of pintxos (or tapas) decorating the city’s bar tops as it is in awarded, white-tablecloth restaurants featuring multicourse tastings.

A procession of bars pepper a maze of cobbled alleyways in Parte Viejo (Old Town), where Basques crawl from one establishment to the next each evening. Grazing on pintxos like sardines, Iberian ham, crab-stuffed peppers, among other delectable specialties, locals wash each bite with a swig of Basque cider or Txakoli, a fizzy white wine crafted from indigenous grapes.

Perched just 12 miles from the French border, the town is rife with natural beauty. This coastal escape embraces the Bay of Biscay and Cantabrian mountain range, showcasing far-reaching vistas. In between feasting, visitors carve out time to explore the city’s rugged coastline, sugar-sand beaches, public plazas, and bayfront esplanade.

The opulent Hotel
Maria Cristina,
A Luxury Collection Hotel, has been serving guests since 1912. This five-star property is a restored landmark and the namesake of
María Cristina Borbón,
Spain’s queen consort from 1829 to 1833. Ornate furnishings, elegant chandeliers, and 19th-century art mark the Belle Epoque-influenced interiors, while rooms afford sweeping views of the
Urumea River
and Cantabrian Sea.

Set on the Pierre Ducasse-designed Plaza Gipuzkoa, a leafy garden modeled after an English forest, Room Mate Gorka is a fashionable four-star, boutique hotel. Staff go above and beyond here, providing directions, honoring special requests, and suggesting pintxos bars to try. Though Gorka doesn’t come with water views, the convenient location makes up for it. The hotel is about a block from Parte Viejo.

The wide-open space of Plaza de la Constitución signifies the heart of Old Town. Dating to 1813, the square was once a bullring—the numbers above windows encircling the plaza signify ticket holders boxes—but the main structure with its wide arcades was the city hall until the 1940s. Nowadays, the plaza is the site of al fresco dining and annual celebrations, including
Santo Tomás
and
Tamborrada
(drum festival).

It’s tough to imagine a pristine stretch of sand in the heart of any city, but Playa de
la Concha
takes the prize for one of Europe’s most alluring urban beaches. Named after its shell shape, it’s gorgeous for sunning and swimming. Both la Concha and
Playa de Ondarreta,
the beach’s western extension, connect to a gorgeous bayfront esplanade, one of the town’s prime places to walk or jog. For surfers and their observers, Playa Zurriola is the beach of choice. On the other side of Mount Urgull in the less touristy
Gros
neighborhood, this patch of coast is where waves soar six feet and higher.

Across from town hall and La Concha is
Alderdi Eder
—which translates to “beautiful place” in Basque—one of San Sebastian’s most elegant parks complete with a carousel. Like the city itself, the green space has evolved over the years, but it is still one of the town’s treasures, awash with colorful flowers, palm trees, and sculptural tamarisks.

One of the most respected eateries in Old Town is Casa Urola, a restaurant offering fine dining upstairs and pintxos downstairs. Debuted in 1956 and helmed by Chef
Pablo Loureiro Rodil
since 2012, this spot plates seasonal dishes and classics. The mi-cuit (half-cooked) foie gras, grilled octopus with Iberian bacon and potato soup, and
Vieira
scallops are fan favorites here, and the wine selections—from
Ribera del Duero
to La Rioja—are also excellent.

Across the Santa Catalina and
Kursaal
bridges in Gros, Geralds Bar might be the least Basque name on the city’s restaurant list. With Australian roots—the owner opened his first outpost in Melbourne—this quaint tavern pours local brews, wines, and a signature bloody Mary, among other libations to pair with its daily menu. Around the corner,
Bodega Donastiarra Gros
is as local as it gets, dating to 1928. Order the octopus here too, as well as the tuna and tender pulled beef, all served with the usual pintxos accompaniment: a basket of crusty white bread.

While the Basque people often swill locally produced wine, beer, and cider, gin and tonic is frequently their drink of choice. At La Gintoneria Donostiarra, the gin selection is varied as the bar stocks rare and exclusive bottles. Mixing some of the most quaffable libations in San Sebastian, the lounge’s expert bartenders incorporate fruit, herbs, flowers, and dry ice for a unique cocktail experience.

If there’s a splurge-worthy restaurant to visit, it’s Arzak, one of the most lauded in the world. Steered by
Juan Mari Arzak
and
Elena Arzak,
a third- and fourth-generation father-daughter team, the three-Michelin star dining spot honors New Basque Cuisine, the culinary movement that
Mr. Arzak
pioneered alongside
Pedro Subijana
in the 1970s. In a charming, hundred-year-old house, the Arzaks curate an innovative, seasonal tasting menu with optional wine pairings, plating course after course of artful fare, reflecting Basque ingredients and heritage.