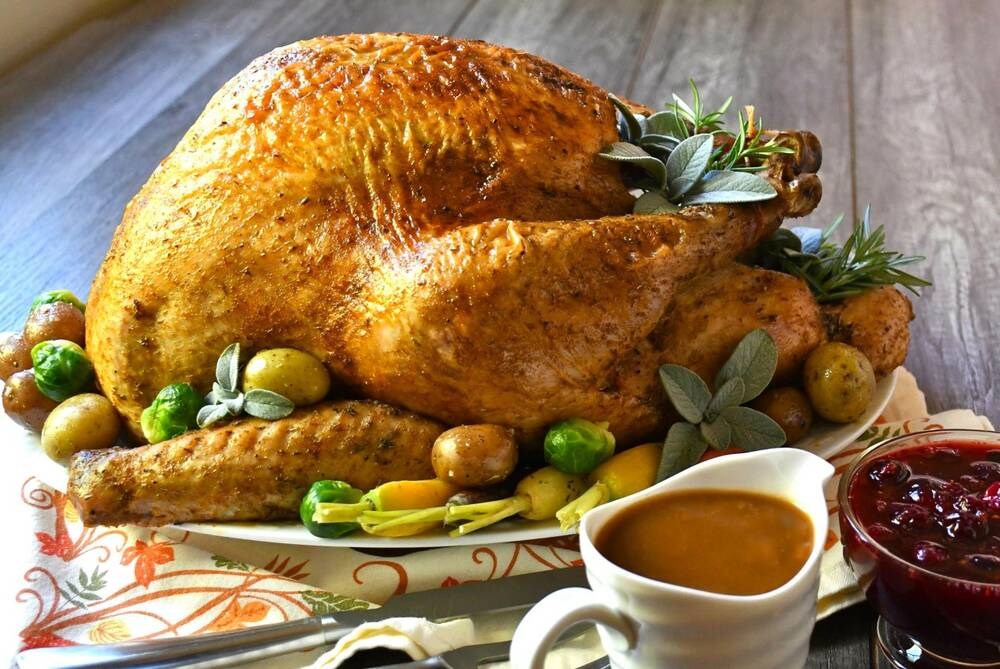 Every year around this time readers ask me for tips on roasting a whole turkey. It’s an entrée often served for a special occasion, such as Christmas, that some people stress out about cooking because, simply put, they don’t what to mess it up. If that’s you, below is some useful information I’ve complied over the years to assist you. No fancy recipe or brining technique, just basic tips to help you prepare a fine roast turkey.

What size turkey to buy?

To ensure you have tasty leftovers, when choosing a whole turkey, allow at least one and half pounds (about 680 grams) per person, or even a bit more. Whole turkey, of course, has bones and the meat shrinks during cooking, so account for that. For example, to serve six, a nine or 10 pound (about 4 to 4.5 kilogram) turkey should suffice. To serve eight, a 12 to 14 pound (about 5.5 to 6.35 kilogram) bird should work. When buying it, if the turkey in my suggested range still looks too small, just choose a bigger bird.

When buying a fresh turkey at a supermarket, check the best before date to make sure it coincides with when you’ll cook it. If possible, to reduce home storage time, buy the turkey, or order it for pick up, two to three days before you’ll cook it. To store it, set the bird in its store packaging in a sided dish/pan and refrigerate until needed.

If you bought a frozen turkey, the safest way to thaw it is in a sided dish/pan in the refrigerator. Allow at least 24 hours thawing time for every five pounds (about 2.25 kilograms) of turkey. For example, a 12 to 14 pound (about 5.5 and 6.35 kilogram) bird will take about three days to thaw.

Preparing the bird for cooking

When ready to cook the turkey, don’t, as some older methods suggest, rinse it with cold water first, as the raw liquids on it could contaminate many kitchen surfaces. Instead, carefully remove from its packaging and set in a shallow-sided roasting pan. Don’t use a deep-sided pan or the sides of the turkey won’t brown as well. Pat the turkey dry with paper towels.

If stuffing the turkey, do so just before cooking it. Fill the main cavity with stuffing, but don’t tightly pack it in, or it may not get hot enough during roasting to kill any bacteria present in the turkey. Also stuff the cavity behind the large flap of skin at the neck end of the bird. Set any leftover stuffing in a casserole dish, cover and bake when the turkey is resting, until piping hot, 30 plus minutes, or so.

Stuffed or unstuffed, before roasting the turkey, brush the skin with a good amount of olive oil or melted butter, which will enhance its colour when cooked. If desired, mix some dried or chopped fresh herbs into the oil or butter before brushing it on the bird, such as sage leaves, rosemary, thyme, poultry seasoning and/or herbes des Provence. Season the turkey with salt and freshly ground black pepper and it’s ready to roast.

Some methods say to put the turkey in the oven and cook until done, no basting required. Others suggest you occasionally baste it with the pan juices to keep the turkey moist and enhance colour. However, if you too frequently baste it, it can slow down the cooking time, as the oven temperature will fluctuate every time you open the oven door.

I take an in-between approach. I let the turkey roast undisturbed until my first doneness check, which usually comes when the bird is not fully cooked. Since I have to open the oven door to do that, it makes sense to baste the turkey then for the reasons already noted. At that time I’ll also give the roasting pan a 180-degree turn to ensure the turkey evenly browns on both sides. When I check for doneness again, if the turkey has not quite reached the internal temperature noted in the next section, I’ll baste it once again, and roast it a while longer, until fully cooked.

The suggested roasting times below for unstuffed and stuffed whole turkey are from the B.C. Turkey Farmers website, bcturkey.com. They are for cooking a whole turkey at an oven temperature of 325 F to 350 F (163 C to 177 C), using regular oven heat, not convection. My preference is 325 F. When buying a whole turkey you’ll notice they’re not all uniform in shape. Some may have thicker breasts, others thinner legs; different traits that can affect cooking time. That’s why I check for doneness about one hour before the end of the recommended roasting time to see how it’s doing. At that the time, as noted above, I’ll also baste the bird with the pan juices. According to the B.C. Turkey Farmers website, the turkey is done when juices seeping from it run clear and an instant-read meat thermometer inserted deep into the inner thigh, not touching the bone, reads 170 F (77 C) for an unstuffed turkey, and 180 F (82 C) for a stuffed turkey.

After the turkey is cooked

After roasting, transfer turkey to a large platter. If you’ve stuffed it, remove stuffing now and set in a heatproof dish. If it does not feel hot, bake stuffing until the centre registers a bacteria-killing 165 F (74 C) on an instant-read thermometer. Tent turkey with foil and rest at least 15 minutes to set the juices before carving. The foil-tented turkey will stay hot quite a long time.

To make three and half cups or so of gravy, skim fat from the pan drippings. Place roasting pan on the stovetop over medium-high heat. Add three cups of turkey (or chicken) stock and bring to a boil. Place 1/2 cup turkey (or chicken) stock and 1/4 cup all-purpose flour in a bowl and whisk until smooth. Pour this mixture into the pan. Whisk and simmer gravy until thickened, about five minutes, and then season with salt and pepper. Expand the ingredient amounts if you want more gravy than that.

To carve the turkey, with a sharp, thin carving knife, remove the leg and wing on one side of the turkey and set on a cutting board. Cut that leg into drumstick and thigh pieces, and then slice the meat off them. Carve the breast on the side of the turkey you removed the leg from, by making thin, slightly angled, vertical slices that run parallel to the breastbone. Arrange the meat on a second platter as you go along. Repeat this process on the other side of the turkey, stopping when you think you’ve have enough sliced meat for your meal.

When the meal is done, remove any meat left on the turkey carcass. According to several sources, that cooked turkey, any leftover sliced turkey from the meal, and the turkey carcass, which you can use to make stock, can be wrapped and refrigerated for three to four days. It can also be frozen for three to four months. For tasty recipes that use leftover roast turkey meat, and one for turkey stock, Google “Eric Akis leftover turkey recipes” and you’ll discover some.

Eric Akis is the author of eight cookbooks. His columns appear in the Life section Wednesday and Sunday.